I’m back in the groove of things; hopefully this is just the first of many reviews. There are a couple of other places that I’ve been to that I’ll have to write about, but all in due time. Bin 46 Wine Bar & Restaurant is the latest reboot of The Modena Wine Cafe with some much needed changes. Read more here.

2014 was probably one of the least productive years I’ve ever had as a writer. While I started a few poems, I never finished them. I haven’t worked on editing (and trying to publish) my novel. I haven’t even written much as far as my new novel. I haven’t even read a book in the past year. It actually sounds pretty disappointing once I look at all of it in retrospect. But I think that 2015 is going to be different. There are a couple of reasons.

I moved and am in an environment where I can actually spend more than 5 minutes at my computer without being interrupted. I’ve met a lot of new people and have been in a lot of interesting places. As any writer knows, fresh exposure to people and places always tickles the creative buds. And if that wasn’t enough, I recently went to my roommate’s holiday part at a sip and paint type place, which led to my first acrylic painting on canvas. It was pretty neat. Plus good time and good laughs.

And of course, me with my painting: 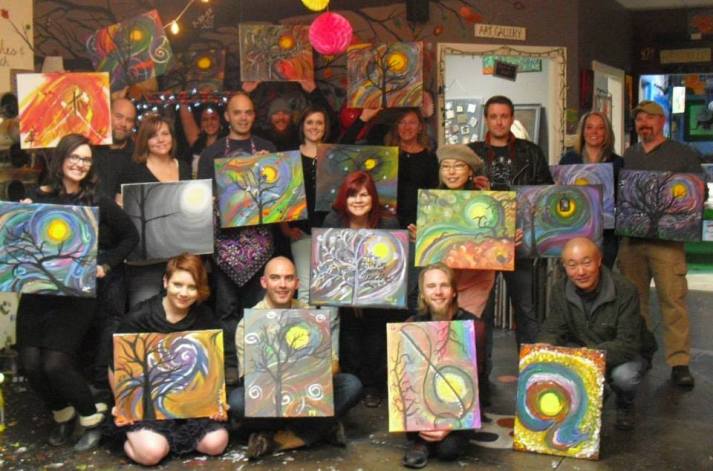 Furthermore, I’ve really been getting into the TV series, Grimm, as it is spooky and grisly in a way that inspires me. It certainly lends a different perspective to the entire fairy tale thing in a way that is neither too campy or too literal. Grimm has actually found a very delightful balance between revamping classic fairy tales and making them its own and staying true to certain characteristics. Also, who wouldn’t like a series with the handsome Sasha Roiz in it? Quite honestly, I can’t imagine anyone else playing the mysterious and charismatic Captain Renard. It makes me rethink some of my leading male characters, and some of my villains, and ways that I can make them last black and white and a little bit more ambiguous. One thing I find fascinating about some of their characters is that you don’t really know where they always stand, and yet they always stay true to their character.

Which is why I am so excited about this book my Dad and his wife bought me for Christmas:

Not only that, but I live just a block away from the library now. Really, there wasn’t an excuse for me to not go to the library before, I only lived 5 minutes away. But I have a couple of goals for 2015. Some of them include:

So there you have it. That’s what’s been going on and that’s what I’m going to do to fix it. I’ve been a horrible slacker (and I’ve been justifying letting my writer’s block dominate my brain by making excuses. The most popular one? That I deserve a break after writing every single day for like 12 years straight…). What I should be doing is scheduling a little block of time to write anyways, no matter how hard it is or how uninspired I’m feeling. I do feel, however, that the change in my living situation will make all the difference in the world, but time will tell!

And just because, I’ll leave you with a little bit of fortune cookie wisdom: “Appearance can be deceiving. Remember endurance makes gold.”

So the other night, I watched some of an interview with David Bowie (courtesy of my boyfriend) during his Ziggy Stardust years. Unfortunately I can’t seem to find it again, but that’s not the point. He was talking about his music, what inspires him, and how he feels like  when he meets new people, he feels like he absorbs their experiences, their personalities, and that he’s just a well of other personalities, etc.  As some of you may or may not know, I’ve really been struggling with writing. To put it bluntly, and vaguely, I more or less fired the best of  my life a few years ago, and ever since, unless I’m writing about some sort of loss or recollection of that muse, I feel like I’m pulling out empty  pockets whenever I look at a piece of paper or a a word document. Nothing seems to come to me. And listening to Bowie talk, watching his facial expressions, and feeling, remotely, like he did, really fired up something inside of me that I thought left long ago. So I started writing. I  only have a couple of two line stanzas so far, but I feel like I’ve come in contact with that part of me that has long since become something foreign and unfamiliar. We’ll see how far I get with it and if it I finish it, I may share a few lines.

So this year I’m going to try and participate in the “A to Z” blogging challenge in April. The point of this challenge is to make a blog post for each day of April (Except Sundays), with the theme of the day matching the letter assigned to that day. As a writer, I also am considering assigning an overall theme to my challenge as well (IE: each blog post has to have a poem in it, or a short story) to get my creative writing juices flowing. I haven’t really decided on what I’m going to do for this challenge exactly, but those are some of the thoughts that I’ve been throwing around.

Are any of you going to do the challenge? If so, any thoughts on what your theme(s) will be?

I have to have things written down somewhere and/or categorized in folders on my desktop. In fact, I can easily say that I am much more organized on my computer than I could ever be at my real desk. I have a folder for all of my submissions and keep a document that lists out the journals I want to submit to, organize them by the month they open their reading period, and note whether or not they accept simultaneous submissions. I then have folders for the individual journals that I submit to, and I name each file in the folders respective to its purpose (Cover letter or Submission) and append the date (2014_1) so that I know what year and month I submitted to them last. This will allow me to examine my previous submissions (as I may solicit a journal multiple times) and see if there is something I want to change. If I received a rejection letter, I try to scan it and keep a copy in that folder. I’ve only received two rejection letters to date with personalized comments. One from The Gettysburg Review and the other from The Missouri Review. I keep these notes pinned above my desk so that I can look at them and remind myself that tenacity is the key here.

Are there any strategies that you use to help keep yourself organized whether it’s for your notes, your work, the places you want to submit to? I’d love to hear your thoughts!

I updated my Publications & Mentions page. It should be flushed out with more in depth details concerning my blogging, my stint as a columnist, and my published creative writing, and some of my undergraduate work. I’ve done quite a bit of stuff throughout the years, but most of the details are lacking primarily because I have to dig through old stuff (that is probably still sitting in a box from when I moved to Colorado ~2 years ago), and find out what those details were. This is probably pretty minor news for you guys, but for me, it’s a step in the right direction. It is important, as an author trying to get published, to make sure I have all of my credentials and previously published work listed out accurately. Although I haven’t been writing a ton lately, I have definitely been reading a lot. Mostly advice for blogging, keeping an author platform, improving SEO, and link building. Here are a couple of helpful articles that you might enjoy as well:

Publishing Credits: The Best to Not So Best

10 Literary Blogs Every 20-Something Should Read

These are just a couple that I have kept up and keep reading and going through related content for. If you have a favorite resource for writing, submitting poems/short stories/etc to lit agents and publishers, info for bloggers on improving SEO or readership, then please share! I’d love to see what you all are reading.

I updated this blog to include more information about my publications, and I have updated Pandy’s Product Reviews to be more SEO friendly. It now has a defined language (en-us), each post has been updated to allow backlinks and show a search description, and each post has been cleaned up so that there isn’t as much junk html. I love making sure that everything is up to date and is easily searchable.

the life, times and ramblings of jaythenerdkid. probably not safe for children.

O at the Edges

Musings on poetry, language, perception, numbers, food, and anything else that slips through the cracks.

The Greater Garden of Nature